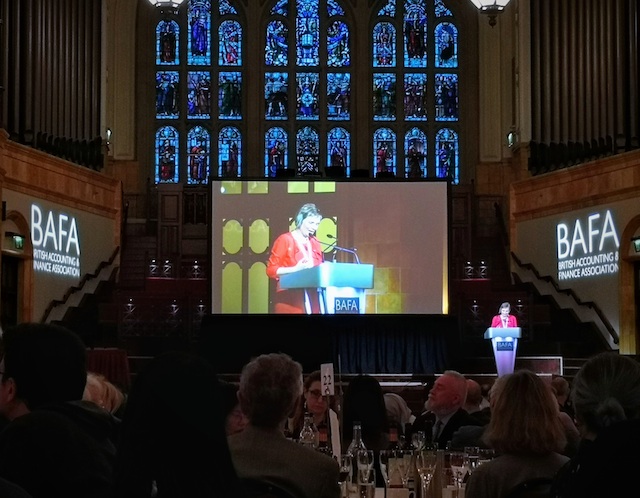 Under the elaborate arched ceiling of the University of Birmingham’s Great Hall in its original redbrick building, BAFA members gathered for their annual dinner and awards ceremony. Professor Lisa Jack presented the awards to this year’s winners after the audience heard about their achievements from the members who had nominated them for the honours.

Professor Niamh Brennan
Following a First in Science at University College Dublin, Niamh qualified as a chartered accountant with KPMG. She also has a PhD from the University of Warwick and is a Chartered Director of the Institute of Directors in London.

Niamh’s honours and awards include the British Accounting Review Best Paper Award 2010 and the Accounting Auditing & Accountability Journal's (AAAJ) Mary Parker Follett Best Manuscript Award 2011. Two of her papers are among AAAJ's 24 outstanding articles of the last 25 years while her article, Can Directors Rely on Experts?, received the Accountancy Ireland Award 2011.

She is Michael MacCormac Professor of Management at University College Dublin and established its Centre for Corporate Governance. Outside academia, Niamh holds many external positions and is former chair of the National College of Art and Design and the Dublin Docklands Development Authority.

Sir Bryan Carsberg
Sir Bryan’s accountancy career began in London and he became a lecturer at LSE in 1964. A year at the University of Chicago to broaden his knowledge of research sparked his enthusiasm for empirical accounting and he was appointed in 1969 as the first Professor of Accounting at the University of Manchester. He developed the Association of University Teachers of Accounting, a forerunner of BAFA, and became Dean of the Faculty of Economics at Manchester. Outside academia, Sir Bryan became the first Director-General of the telecoms regulator Oftel and also served as Director-General of the Office of Fair Trading and Secretary-General of the International Accounting Standards Committee.

Professor Aidan Berry
With 24 years’ experience as Professor of Accounting, Aidan retired in 2018 as Director of Brighton Business School. Among his achievements, he has written six books in accounting and corporate governance, held the post of Chief Examiner for ACCA for four years, acted as external examiner at numerous institutions and has strong links with professional bodies including BAFA.

Professor Christine Helliar
A chartered accountant and investment banker, Christine moved from the University of Dundee to become Head of Commerce at University of South Australia in 2012. She has served as both President and Chair of the Trustees of BAFA. Christine is an editor of the international journal Accounting Education and on the Editorial Board for numerous top ranking academic journals. In 2018 she was on the ERA REC committee for the Australian government - the equivalent of the UK REF panel.

Professor Ursula Lucas
Now holding an Emerita role at the University of the West of England, Ursula has made a significant contribution to accountancy education for 30 years. Widely published in journals including British Accountancy Review, she has researched students’ experiences and perceptions of learning and subject knowledge. Ursula was also an early pioneer of the study of the impact of students’ approaches to learning.

Summing up the evening, Professor Lisa Jack says: 'It is always a pleasure to present the BAFA awards. Our Distinguished Academic Award was first given in 1994, to Professor Geoff Whittington. The Lifetime Achievement Awards have been going since 2003 and we added the Distinguished Contribution Award in 2016. This year was the first occasion on which we presented the Outstanding Contribution to Accounting and Finance Education Award. “All the recipients have made their mark on research, teaching and professional accounting, contributing not only to the discipline in terms of knowledge but also in advice to regulators and policy makers in higher education, commerce and public life. Holding the awards with the dinner began five years ago and makes the occasion a very special one for BAFA members and guests'.